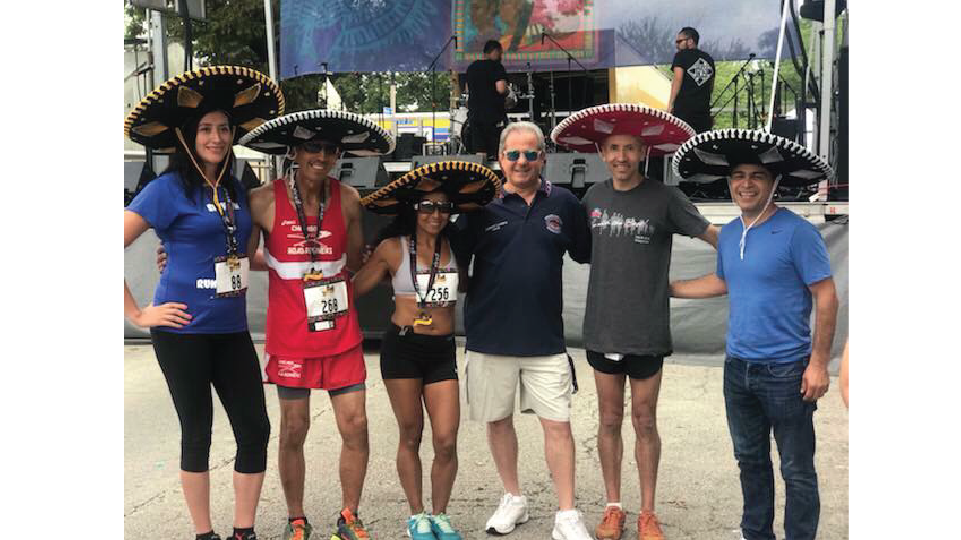 With music of mariachis in the starting line and at the end of the competition was held on Saturday 18 the first Corrida del Mariachi, with more than 700 runners who toured the streets of North Berwyn, the suburb located south of the city of Chicago .

The years go by but Emisael Favela, the best Hispanic runner in Chicago in the last two decades, continues in force. Favela, 41, won the overall competition with a time of 16:43 minutes, beating Sean Clark and Hector Lopez. The first three are residents of Berwyn.

"Not because it's in my neighborhood but the race was very fun with the music of the mariachis, the tamales and the Jarritos. Many told me 'you won' but I told them, 'You won too and everyone won because it was fun,' said Favela, an athlete from Durango, Mexico, who has already lost the account of the competitions he won in his career in the Midwest American. "It was incredible because there were many volunteers and the truth is that the race was very well organized because it was the first year."

Favela, used to finishing in the top 100 in the annual Chicago Marathon, did not have much activity this year and won a recent 5-kilometer race at Garfield Park and also participated in an elite competition in Iowa. But this year it will be " cheering friends at some points of the Chicago marathon "and will be ready to compete only in December at the marathon in Sacramento, California.

In Berwyn the Duranguense appealed to his experience to overcome younger competitors. "I did not expect so much for this race because there were several quick youngsters. If we run a mile for sure I will not be able to keep up because they are faster but in 5 kilometers or 3.2 miles the experience helps me keep up and that counts in my favor, "he added.

The Durango athlete was not the only one in the Favela to take the hat for the winner. His wife Daisy Favela, born in Belize, was third in the women's branch but won the category of 40 to 49 years and could also collect his well-deserved prize.

"I started running in 2004 but I was not very disciplined until I met Emisael, who told me, 'if you want to be a runner you have to do more work'. The mental part was the hardest part for me, "said Daisy Favela, 43, who was third overall behind the winner among the women, Elizabeth Ramos, of Cicero, who scored 20:34, and Laura Macías de Berwyn. . "I'm happy because I won the hat made in Mexico, I want to put it on the wall (of the house) with my little medal."

The competition was a 5-kilometer run or walk that debuted on the Chicago area athletic calendar as part of Fiesta Nuestras Roots, a two-day community celebration prior to the start of classes for students in the area.

"We are very happy with the race, we expected about 250 runners but they ran more than 700," said Joe Vallez, executive director of the North Berwyn Park District, organizer of the event. "The runners went through the streets of the neighborhood and the unique character of our career made many people interested in participating."

La Corrida del Mariachi is named after the demographic composition of the North Berwyn suburb. "The reason for the name is simple, this is a diverse community and we want to show its characteristics. About 85 percent of our population is Latino and about 75 percent are Mexican, "added Vallez, who reflects that heritage because he was born in Chicago to parents in León, Guanajuato, Mexico and Laredo. Texas.

Mariachi musicians were present on Wesley and Clarence avenues and along Riverside Drive and Home Avenue. Cheerleaders from Morton West Middle School also brightened the competition as the athletes passed through the school gate.

The athletic competition and Fiesta Nuestras Raíces are part of the activities of the North Berwyn Park District, which presents sports programs in soccer, basketball, baseball and volleyball, with high competition or recreational levels. The soccer program has helped several young people in the area obtain university scholarships in the Midwest and a few days ago participated in an annual vision with coaches from national universities in Muscatine, Iowa.

The collection of the Corrida del Mariachi will serve in part for the construction of the artistic center of the district. The debut in 2018 was a success that attracted more participants than expected. The idea of ​​the park district is to turn it into an annual party. Vallez expects even larger numbers for the next edition. "Today we started planning the next race," he said one day after the initial race.